The Second Croatian Youthfest, organized by the Office of Youth Ministry of the Sisak Diocese and the Legion of Mary in Petrinja, was held in Petrinja from October 11 to 13, with the motto: “Let anyone who is thirsty come!”

In a somewhat altered form, this three-day prayer gathering of young people was permeated with catechesis, testimonies of Christian life, prayer, confessions, the Eucharist, Adoration, song and dance, as well as a concert of religious music. All those who could not participate in the program due to limited attendance could follow everything via Facebook and the YouTube channel Mladifest.

The first day, on Friday, September 11, testimonies were given by young people from the Diocese of Sisak, as well as Ivana Foretić, a mother of five children and an activist in the association Vigilare. Catechesis was conducted by Fr.  Stjepan Brčina, while the celebration of the Mass was led by the commissioner for youth ministry of the Diocese of Sisak, Fr. Ivan Grbešić. 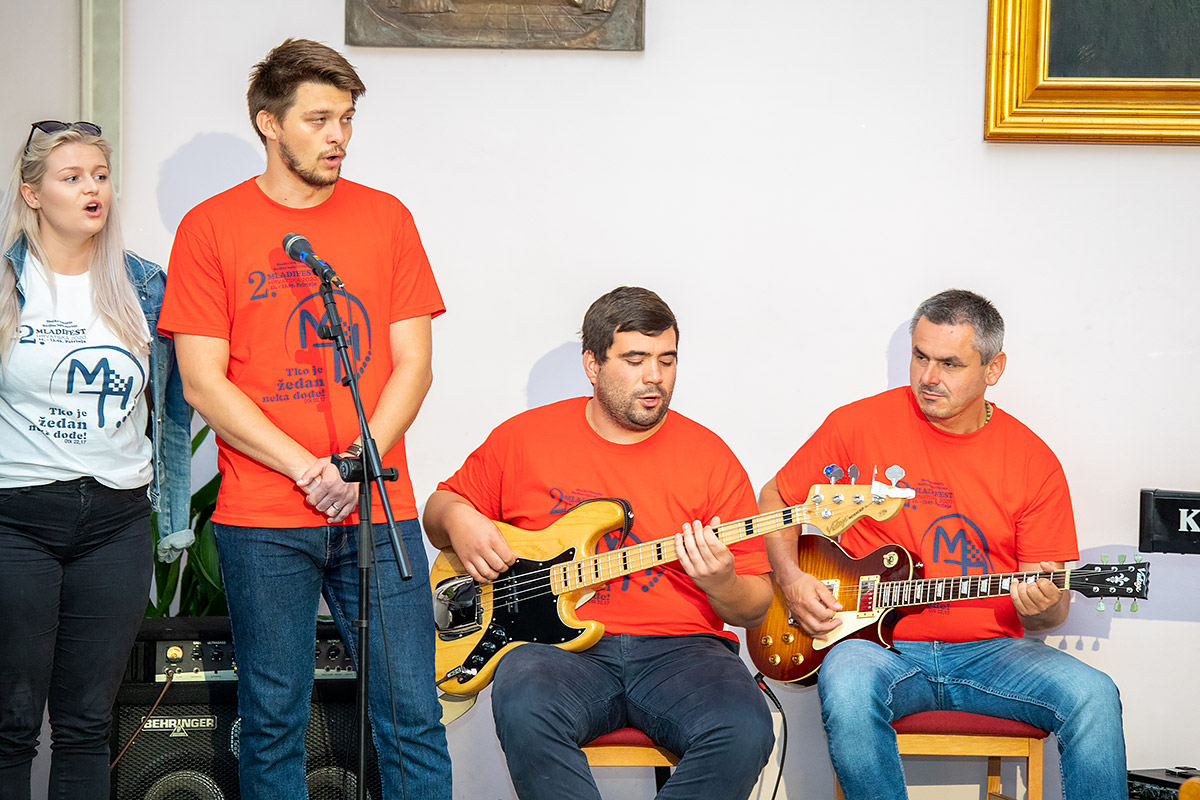 The second day, on Saturday, September 12, testimonies were given by representatives of the Fra Bonifacio Ivan Pavletić Catholic Indoor Soccer League of the Diocese of Sisak and Hrvoje Brčić,  an associate of Cursillo and the Salesian Youth Movement. This was followed by the testimony of Željka Markić from the association In the Name of the Family, catechesis, Mass and Adoration led by Fr. Ike Mandurić. In the evening, Alan Hržica and Vanessa Mioč gave a concert in the city pavilion.

On the last day, members of the League of Mary presented a play on the encounter between Jesus and the Samarian woman. Testimonies were given by Sanjin Jurić, SDB, on how he chose religious life and his life’s vocation, and the Glavaš family, on the joys and beauty of married life. 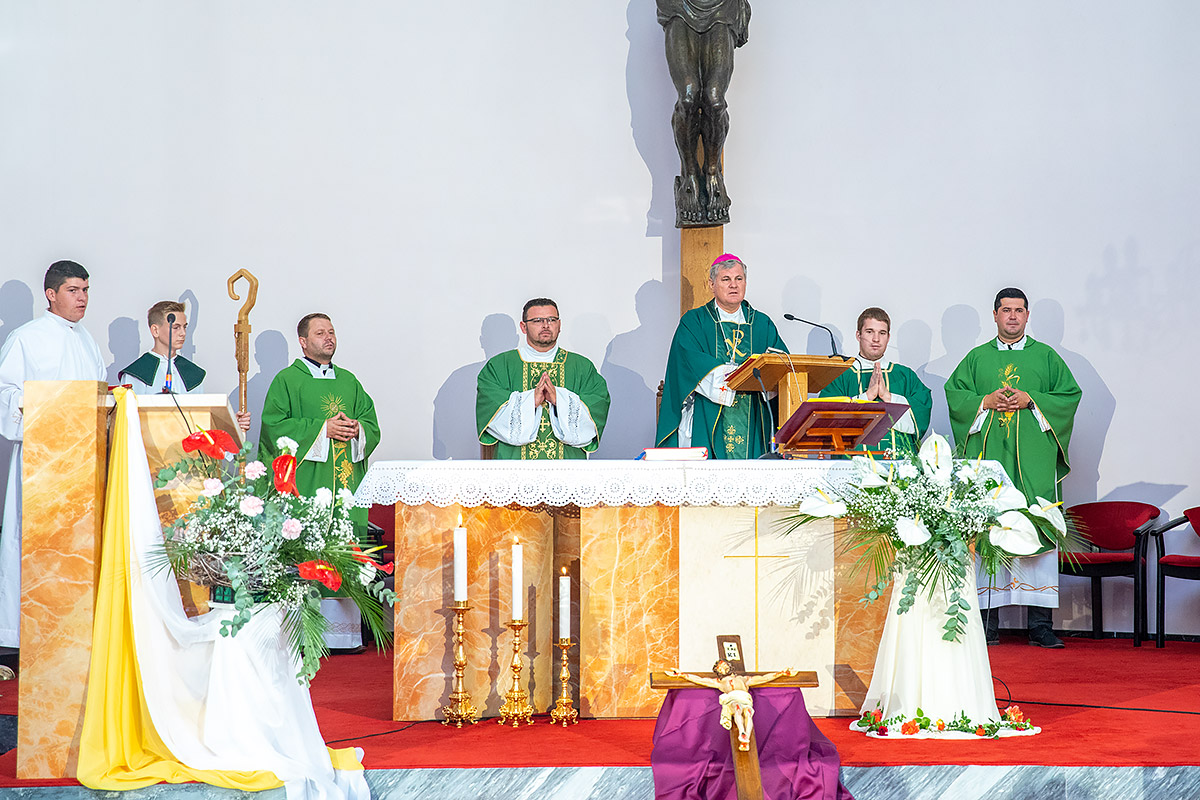 This year’s Youthfest was concluded by Bishop Vlado Košić. In the catechesis, the bishop reflected on this year’s motto, noting that these words are from the Book of Revelation by Saint John the Apostle. “The entire final sentence of the Book of Revelation, however, which includes the words of the motto, is a call for vigilance and conversion, as follows: ‘Let anyone who is thirsty come; and let anyone who wishes take the free gift of the water of life.’ We could say that with these words St. John the Apostle is calling all who read his messages to come to Jesus. First of all, here is the word ‘thirsty.’ Who is thirsty? Why should specifically the thirsty come to Jesus? Because they have a need, because something attracts them. The apostle encourages, cheers and invites them to come without fear. And what will they find? They will find the ‘water of life.’ Of course, this is an image! The worst thing, you know, would be if the need existed and nothing could satisfy it.  Imagine a traveler crossing the desert, exhausted and thirsty, finally coming to a village, and exclaiming to the inhabitants: ‘Water, water! Give me some water to drink,’ and they answer: ‘We don’t know what that is. It doesn’t exist here.’

“This is, nevertheless, impossible, because God so created man and every creature that he meets our needs and provides us with the object of our desires. If we are hungry, there is food to satiate us, and if we are thirsty, there is drink to quench our thirst. We could go on: if we are sick, there are physicians who will cure us; if we are sad and alone, there are friends who will comfort us… If we seek the meaning of life, there is Jesus who will show us what it is and give it to us,” said the bishop to the young people, among other things.

Following the Prayer of the Rosary, the bishop conducted High Mass, as the culmination of this year’s Youthfest. The concelebrants were the pastor of Voloder, Marijan Štingl, and the pastor of Sunja, Ivan Faletar. During the Mass, a number of priests heard confessions.

Referring to the readings during the homily, the bishop said they were a call for forgiveness. “In the first reading from the Book of Sirach, we heard how important it is not to nourish wrath or anger because these are hateful before God. How, asks the Old Testament sage Sirach, could a man obtain forgiveness if he does not forgive the injustices done to him, that is to say, forgive his neighbors? These are significant words that are also connected with the Gospel, when Peter the Apostle asks Jesus if he should forgive his brother as many as seven times. Jesus answers: ‘I say to you, not seven times but seventy-seven times.’ This means without measure. Do not count. Forgive and be forgiving.  Jesus tells us the parable of a servant in heavy debt to his master who asks to be forgiven of a 10,000 talent loan. The master forgives the loan out of compassion. When the servant left the master and met a fellow servant who owed him 100 denarii, he did not want to forgive the loan but had his debtor thrown into prison, even though his fellow servant had pleaded with him using the same words he had spoken to his master. Jesus says that it is necessary to forgive a debt or injustice when someone asks, wants to apologize or says he is sorry that he cannot repay the debt at present.

“Then he teaches us as he taught us to pray in the Lord’s Prayer, emphasizing the following: ‘Forgive us our debts as we forgive our debtors’ and says: ‘So will my heavenly Father do to you, unless each of you forgives your brother from your heart.’ It is important that we know how to act without wrath, vengeance or hatred, as we are called to do by the Lord, who showed the greatest mercy to humankind,’ said the bishop, inviting everyone to participate in the Adoration of the Cross, Christ who died for us. This year, had not been possible to do so on Good Friday, so the Congregation of Divine Worship decided that there would be Adoration on the feast of the Exaltation of the Holy Cross.

After the Mass, on behalf of the organizer, everyone who participated in this year’s Youthfest was thanked by the catechist Vlado Sučec, and invited to attend the Third Croatian Youthfest next year.